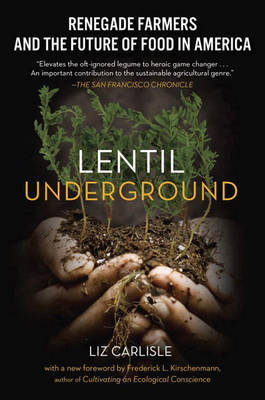 Lentil Underground: Renegade Farmers and the Future of Food in America

For the past four decades, third-generation Montana farmer David Oien has been seeding a revolution against corporate agribusiness in the belly of the beast, the American grain belt. They have replaced their wheat and barley with a seemingly odd new crop, the lentil, a legume that has been part of the human diet since Neolithic times, but, until Oien's work, was never grown on Montana farms. In this eye-opening narrative, journalist and food scientist Liz Carlisle chronicles Oien's unlikely emergence as the leader of this agricultural upheaval.

Liz Carlisle holds a BA from Harvard University and a PhD in geography from the University of California at Berkeley. Carlisle is also a country music singer-songwriter who has opened shows for Travis Tritt, LeAnn Rimes, and Sugarland. She currently lives in Berkeley, California.